The Netherlands Authority for Consumers and Markets (ACM) has imposed fines totaling more than 82 million euros on four major cigarette manufacturers. Between July 2008 and July 2011, they distorted competition. They exchanged information, through wholesalers among other channels, about future prices of cigarette packs. That is illegal.

Four cigarette manufacturers have been fined

The four companies produce cigarettes under various brands, such as Marlboro, Lucky Strike, Gauloises, and Camel. The fines imposed on each company are:

What did they do?

Each cigarette manufacturer determines its own price that consumers pay in stores for a pack of cigarettes. This price is always printed on the pack. That is different from almost any other consumer product, for which the retailer determines the price. For cigarettes, all manufacturers send their new price lists to wholesalers and other buyers several weeks before the prices in stores are adjusted. This allows them to start adjusting their sales systems. However, some buyers also passed those price lists straight on to competitor manufacturers, before the new retail prices came into effect.

The cigarette manufacturers knowingly asked for, received, and accepted this information. For example, a JTI employee wrote in an e-mail to a wholesaler: “Attached is BAT’s price list. As soon as you receive ITN and PMI, please forward them to me immediately” [ACM: Please note that the original quote was in Dutch].

ACM has found that the manufacturers did in fact use the information about their competitors when determining their own retail prices for a pack of cigarettes. This allowed them to increase their profit margins. This is evident in an internal email sent by JTI, for example: “BAT, PMI and ITN now confirmed an RSP [ACM: resale price] increase per mid 2009 of €0.10 on their total portfolio effective as of August/September. We recommend increasing our entire portfolio by €0.10 as of September 2009 improving our profitability.”

As a result, the cigarette manufacturers regularly adjusted their retail prices on the basis of information about future prices of competing cigarette brands that they received from wholesalers. As a consequence, there was much less uncertainty among manufacturers about competitors’ future pricing, and manufacturers were able to coordinate their pricing strategies. In this way, competition between them was distorted.

What is and what is not allowed when exchanging information between businesses?

It is not illegal for competitors to exchange general information and information that is publicly available. However, any exchange of information about future retail prices (including recommended retail prices) will reduce the uncertainty regarding the market behavior of competitors. That distorts competition between them, and can lead to higher prices and profits in comparison with a situation where such information is not shared. That is why the exchange of this kind of information is not allowed, including when this is done through third parties. Businesses should therefore pay close attention to what information they share with or receive from competitors, even if this is done through a third party.

In what situations do businesses have to pay extra attention when exchanging information with competitors? In the following situations for example:

Enforcing the rules on fair competition

ACM ensures that markets work well for people and businesses. Competition among businesses contributes to competitive prices, improves quality, and stimulates innovation. Competition keeps businesses on their toes when it comes to responding as effectively as possible to the wishes and needs of consumers, and helps to prevent surplus profits. 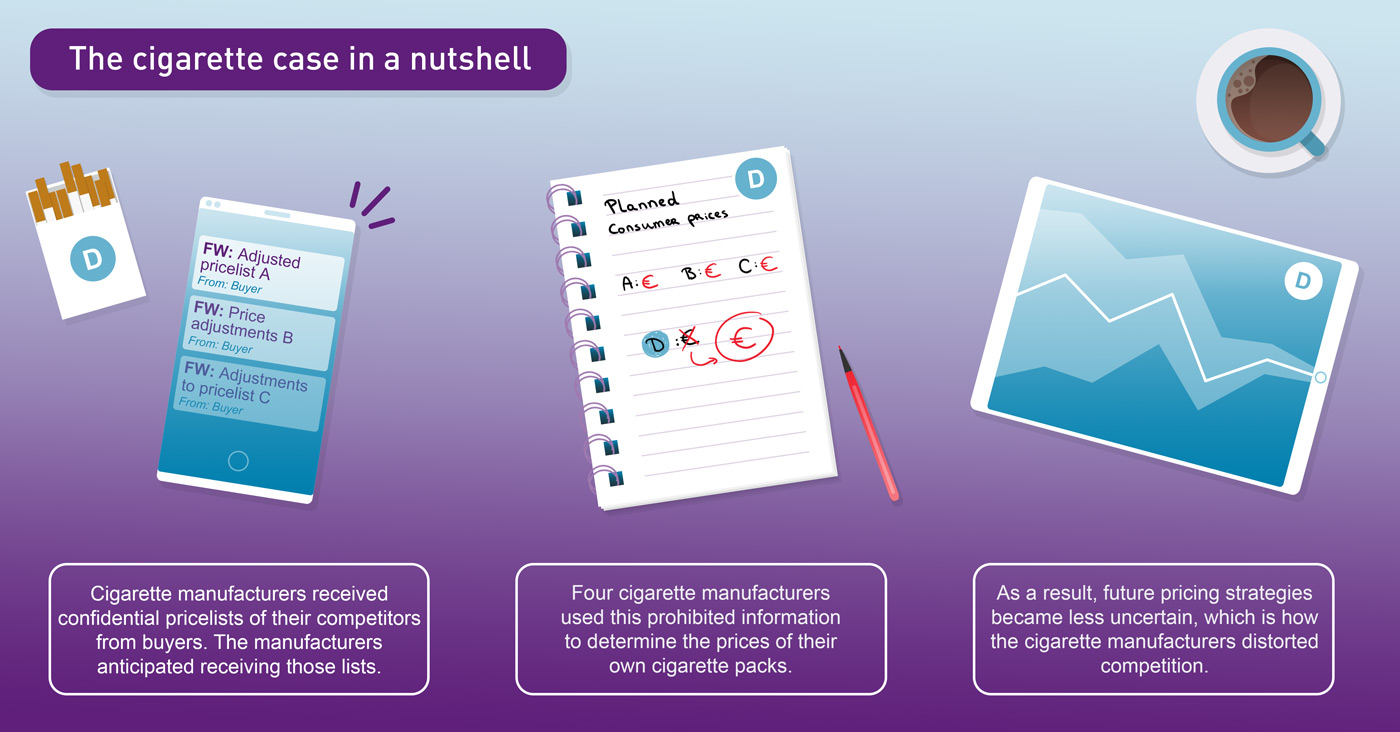 26-02-2019 Guidelines for cooperation between businesses