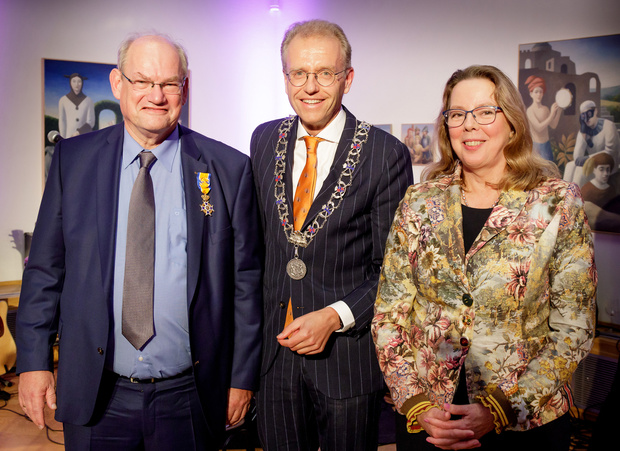 Chief Economist Jarig van Sinderen of the Netherlands Authority for Consumers and Markets (ACM) was awarded an Officer in the Order of Orange-Nassau, which is a royal decoration for meritorious service to Dutch society. Mr. Van Sinderen received the decoration from Mayor Leendert de Lange of the town of Wassenaar at his farewell reception.

Mr. Van Sinderen, Ph.D., received this decoration because, for many years, he had dedicated himself to economic research and education, both in science and in government, as well as in various other positions. Mr. Van Sinderen worked as an economist in various executive positions at the Ministry of Economic Affairs, the Netherlands Scientific Council for Government Policy, and Statistics Netherlands. In 2006, Mr. Van Sinderen became the first Chief Economist at the Netherlands Competition Authority, which merged into ACM in 2013. In addition, from 1991, he has worked as a part-time professor at the Erasmus University in Rotterdam. Today, he stepped down from ACM at the age of 66.

Martijn Snoep, Chairman of the Board of ACM, comments: ‘Jarig has played a critical role in the economic research that underpins much of ACM’s work, including, for example, economic studies into the harm that cartels inflict as well as economic analyses of the effects of ACM’s interventions. With his Chief Economist’s Office, he has given well-founded economic insights and economic substantiation a permanent place in ACM’s day-to-day work.’

At today’s symposium, called ‘Impact of oversight and policy,’ which also doubled as Mr. Van Sinderen’s farewell reception, much thought was given to the impact that economic analyses have on oversight and policy. What has been observed in that context is a shift from pure economic analyses to more empiricism and insights in the field of human behavior. In addition, attention was also given to the role of economic models, for example in health care mergers. Economic and behavioral analyses often form the basis of ACM’s decisions. Chairman of the Board of ACM Martijn Snoep emphasizes that effective regulation is only possible with well-founded decisions and with attention to what is going on in society.